Distributed: Health Propels the Adoption of Blockchain Technology in Healthcare 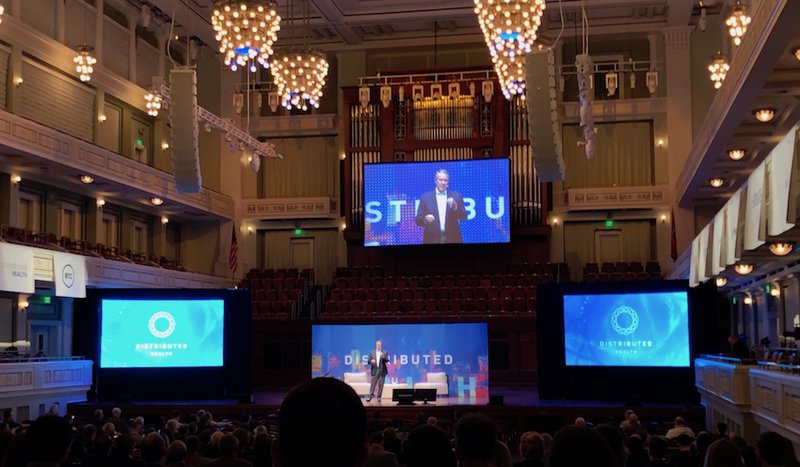 As the second day of Distributed: Health concluded, attendees were left with a handful of solutions to explore, dozens of questions to ponder and countless new connections to pursue.

The conference, which enjoyed its third year of bringing healthcare executives and decentralizing technologists together at the Schermerhorn Symphony Center in Nashville, TN, featured keynote presentations from legacy leaders like former senator Bill Frist, panel discussions from industry stalwarts like the U.S. Department of Health and Human Services, and blockchain-powered announcements from pioneers like Change Healthcare.

More than 700 registered attendees absorbed information, asked questions and interfaced with one another to form the building blocks that will carry the healthcare industry into its next iteration. About 30 developers attended an accompanying code camp today to sharpen their blockchain coding skills and, eventually, put decentralizing ideas into practice.

“Healthcare Is Ripe for Disruption”

The event opened on Monday with welcome remarks and a fireside chat led by former medical practitioner, Tennessee senator and House Majority Leader Bill Frist. He leveraged his experience as both a provider and regulator to describe Nashville’s unique position in the healthcare atmosphere (where the industry has a $38.8 billion impact, per at least one estimation ) and the industry’s dire need for fundamental change.

Inviting Michael Painter, senior program officer at the Robert Wood Johnson Foundation, to join him in a fireside chat, Frist expanded on the need for blockchain solutions in healthcare, pointing out that the first step to addressing issues like healthcare disparity and encouraging healthy lifestyles more broadly will be collecting and leveraging data in a decentralized way.

“Without access to current, real data that can be trusted, that is privacy protected, that is distributed … we can’t make any real progress,” Frist said. “Blockchain [technology] has the opportunity … to address one of those basic needs of society. Which is to make sure that our children have a better life, have better health, than we have.”

In the aptly named Nashville Ledger, Jeannie Naujeck takes a look at the blockchain community that is building in Nashville.  It is a timely look as the city breaks into the Top 20 US Cities For Blockchain Jobs. 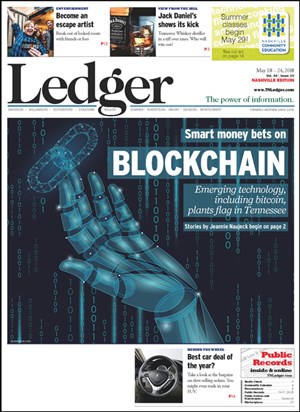 But tucked among the headline-grabbers was a brief bill, less than 300 words long, that attracted no controversy whatsoever.

Not only did it pass both houses with bipartisan support, it passed with unanimous support – despite being concerned with an esoteric technology that some legislators had never heard of.

The bill that united legislators this session was an official recognition of blockchain, an emerging technology that could transform the operations of any business that depends on secure, transparent, efficient transactions – including some of Tennessee’s most important industries.

What likely sold legislators, even if they didn’t quite understand the technology, was its potential to attract new business to the state.

“Any state worth its salt wants to compete for business,” says Joan MacLeod Heminway, a corporate and securities lawyer and professor of law at the University of Tennessee-Knoxville.

“Blockchain technology is the shiny new penny, and everyone wants to jump on the bandwagon, because if you don’t you might get left behind. Tennessee is a very entrepreneurial state, and we like to make sure that if entrepreneurs think they need something we give it to them.”

Many people know blockchain as the technology that powers cryptocurrencies like bitcoin, which hit the news with its huge run-up in value last year, making digital millionaires of those who got in on the ground floor. But the technology has far greater implications for the Tennessee economy.

“Blockchain is a new and exciting industry with almost unlimited potential in different applications,” explains Rep. Jason Powell, a Democrat who sponsored the House bill. Steve Dickerson, a Republican, sponsored it in the Senate.

“I think there is tremendous upside, and it’s great that Tennessee has planted a flag to say that we are open for business when it comes to blockchain, and hopefully, can continue to foster either businesses starting up or moving here that are in that space.”

South by Southwest (SXSW) has wrapped up in Austin, TX.  This annual 10-day convergence of music, media and technology that began in 1967 has grown over the years to become known as the conference of the year for creative innovation.  SXSW Interactive, the technology focused sub-conference has become the biggest, most important emerging technology conference in the world.  It is known as a breeding ground for new ideas and creative tech.  Among the trends that SXSW focused on this year, the two areas that garnered the most attention were AI and Blockchain.

Blockchain was a brand new addition to the 2018 lineup.  The conference had a series of sessions that focused on how blockchain will “revolutionize all data-driven transactional systems” in areas such as healthcare, entertainment, finance, mobility, and social good.   These sessions were led by top innovators such in the blockchain space.

Blockchain and the Crisis in Healthcare

The crisis was defined by the group as largely a financial crisis of our own making.  The primary drivers of the crisis are prices and administrative burden.  Though blockchain is young and has its challenges, the panel agreed that the technology is an enabler because of its ability to address issues of trust, transparency and incentive alignment.  This can have a major impact in areas such as medical records, clinical trials, payments, insurance design, and behavior.

Blockchain-based medical records was a center of attention for a large section of the panel, as well as much of the Q&A.  While there was consensus around the medical records use case, there was some disagreement on how quickly this would happen.  This is certainly not going to be the first healthcare application on the blockchain to scale.  The benefits of carrying a longitudinal health record on your phone is most attractive to pockets of patients, not the general public.  Many companies have tried to tackle this problem over the years.  “What has the blockchain changed?” was a point of debate amongst the panelists.  Challenges still exist around data protection and consumer incentives.  The answers could take some time to understand.

So what projects will move more quickly?  The panelists focused this section of the discussion on Hashed Health’s Professional Credentials Exchange and Change Healthcare’s claims transparency product as two examples of 2018 initiatives that solve real problems in today’s world.

For Hashed Health, provider licensure and credentialing is the perfect initial use case.  It has an ROI.  It has an innovative “exchange” business model that does not threaten incumbents, and it does not deal with sensitive information like PHI.

For Change Healthcare, a product that can “accurately track, in real time, the status of claims submission and remittance across the complete claim lifecycle” has tremendous strategic value.  By starting with Change’s own claims process, Change Healthcare argues can begin a process by which they use blockchain to solve a real problem while learning about how to scale the technology out to a larger and larger network.

Other near term use cases discussed included Lipscomb’s collaboration with Hashed around creating a shared ledger for recording graduation data on the blockchain, where they are providing transparency to the market while reducing their back-office overhead associated with manual graduate verification processes.  Healthverity is working on a e-consent application that they feel can move quickly as well.

Also in the spotlight at SXSW2018 was the city of Nashville.  John Bass participated in a panel with Nashville-based technology leaders including Sal Novin from Cognizant, Kearstin Patterson from HCA and Lindsey Cox from LaunchTN.  The panel was filmed live for the Comcast SXSW Lounge series.  The topic Comcast wanted to discuss was Nashville as a healthcare technology innovation hub.

Nashville has become a national hub for the creative class, enjoying the competitive advantages of a creative culture, a well-educated population, and a thriving tech industry which has become a leading force in the region’s growth, with thousands of technology job opportunities in fields from music and entertainment to healthcare to enterprise software development.

A few stats, according to Brian Moyer of the Nashville Technology Council:

Furthermore, Nashville specializes in healthcare. Nashville is differentiated by its impressive concentration of HIT assets that includes 40% of the investor owned hosptals in the US and over 4000 healthcare companies (18 of which are publically traded).

This sets Nashville up very well to be a center of gravity for the next generation of healthcare companies that will use technology such as blockchain, AI, ML, and IoT.

Healthcare is about to go through a wave of innovation unleashed by the convergence of these technologies.  This wave is coming at the right time as our government and our industries are being eaten away by healthcare costs.  The panel discussed these opportunities and how we plan to cap

In addition, the panel discussed how Nashville’s collaborative culture can help it harness this moment to bring together diverse resources around the health crisis.

Sorry, no posts matched your criteria

This site uses cookies. By continuing to browse the site, you are agreeing to our use of cookies.

We may request cookies to be set on your device. We use cookies to let us know when you visit our websites, how you interact with us, to enrich your user experience, and to customize your relationship with our website.

Click on the different category headings to find out more. You can also change some of your preferences. Note that blocking some types of cookies may impact your experience on our websites and the services we are able to offer.

These cookies are strictly necessary to provide you with services available through our website and to use some of its features.

Because these cookies are strictly necessary to deliver the website, refuseing them will have impact how our site functions. You always can block or delete cookies by changing your browser settings and force blocking all cookies on this website. But this will always prompt you to accept/refuse cookies when revisiting our site.

We fully respect if you want to refuse cookies but to avoid asking you again and again kindly allow us to store a cookie for that. You are free to opt out any time or opt in for other cookies to get a better experience. If you refuse cookies we will remove all set cookies in our domain.

We provide you with a list of stored cookies on your computer in our domain so you can check what we stored. Due to security reasons we are not able to show or modify cookies from other domains. You can check these in your browser security settings.

We also use different external services like Google Webfonts, Google Maps, and external Video providers. Since these providers may collect personal data like your IP address we allow you to block them here. Please be aware that this might heavily reduce the functionality and appearance of our site. Changes will take effect once you reload the page.